Apparently, Harper’s Bazaar Australia is in dire need of increased sales and what better way of achieving that than by putting an aging supermodel on the cover just the way Playboy did in 1994. So, here’s the result. We see a 49-year-old (almost 50) Elle Macpherson, photographed by singer/friend Bryan Adams (he photographs for a living now?!), mimicking her now ancient Playboy cover.

News outlets around the world are keen on stressing how identical the covers are. No. No. If they were actually identical we would be seeing a peek of her privates once again, but sadly ‘The Body’ chose for the complete leg coverage this time around.

Bazaar chief Kellie Hush hopes this “cover will be as iconic as the 1994 Playboy cover was in its time”. I don’t think so, Kellie. There’s nothing new about 50-year-olds being nude on covers. Hello, Madonna! 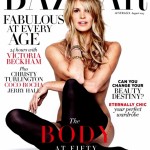 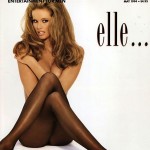